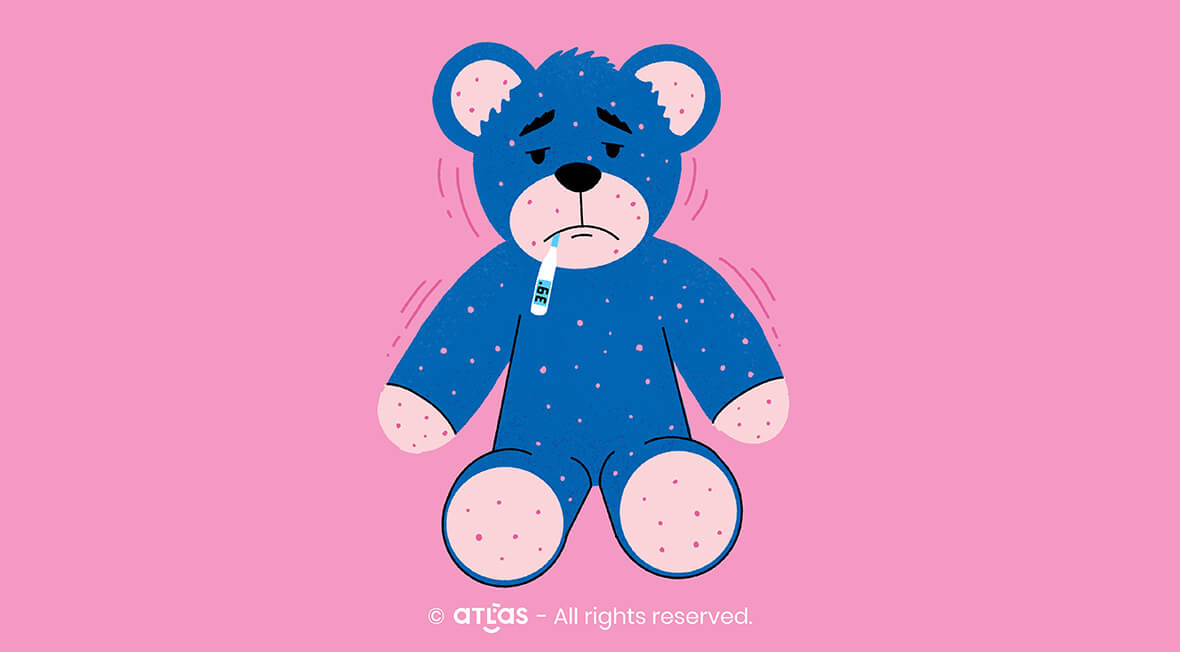 In times when infectious diseases titrate the danger to the millimetre, who is talking about chickenpox, under its better known name, “chicken”? Chickenpox (or Varicella) however, remains one of the diseases of childhood with extremely high contagiousness.

Chickenpox or Varicella is an acute infectious disease, one of the dreaded diseases of childhood, caused by the varicella-zoster virus, and is known in popular parlance as “wind-shed”, which is manifested by fever and generalized rash. Most cases of chickenpox are recorded in winter and spring, especially in children aged 2 to 10 years.

How to get infection in chickenpox

Transmission of the varicella-zoster virus is done by air (hence the name “wind shed”), through drops of nasopharyngeal secretions coming from an infected person. The virus enters the body through the nasopharyngeal mucosa, initially multiplies in the respiratory tract, then reaches the blood, being disseminated throughout the body. Having a particular tropism for skins is located with predilection in the superficial layers of the skin, where it continues its multiplication producing cellular damage expressed by the rash. The period of incubating can last between 7-21 days.

In rare cases, the infection can also occur through contaminated surfaces, the virus having the ability to resist in the external environment for a short time.

In pregnant women chickenpox can lead to infection of the fetus, with the appearance of congenital chickenpox, a condition that often evolves in severe form, leading to the death of the newborn in 10-20% of cases.

The pre-eruptive period, which lasts 1-2 days, is manifested by malaise, lack of appetite, fatigue, fever and headache. During this period, in about 75% of cases, a feverish 38-38.5°C, rarely higher, occurs. In the young child, these symptoms may be absent, the disease starting directly with the appearance of the rash.

The eruptive period is characterized by the appearance of macules, pink or red spots, with a diameter of 2-6 mm in the chest, then on the face and limbs, in the hairy skin of the head, and in more severe forms even in the oral cavity (tongue, cheeks, neck), in the eyes or on the genital and mucosa.

Within a few hours, the macules turn into papules, spots that proeminent on the surface of the skin, and then turn into 3-5 mm vesicles containing a clear liquid, like dew drops. The vesicles break easily, sometimes at the touch of a button, causing itching. Usually occur in 3-4 waves, every 2-3 days, waves preceded by mild fever. After 4-6 days, the vesicles flatten, forming a crust that spontaneously breaks off in about 10 days.

The rash in chickenpox is accompanied by discomfort and itching, the blisters broken by scratching can leave scars.

Mild-shaped chickenpox is characterized by several eruptive elements that remain in the stage of macule or papule.

Congenital varicose veins present in the first trimester of pregnancy can favor low weight at birth, lead to malformations such as encephalopathy, eye abnormalities (optical atrophy, cataracts), deafness or cardiac malformations. If chickenpox occurs in the last days of pregnancy, the newborn may develop a severe form that progresses to death in 35% of cases.

Chickenpox also affects adults! Although it is a childhood-specific disease, chickenpox can also manifest itself in adults who have not been through infection, and if in children we usually talk about mild forms, in adults the risk of complications is much higher.

Chickenpox is usually treated at home, with only severe or complicated cases in the hospital.

Rigorous hygiene of vesicle areas is required to avoid overinfection, clothing must be changed daily. In the case of children, a safety measure is to cut the nails as short as possible, so that the little ones do not cause the blisters to break by scratching. Shower is not prohibited, but it is recommended to use hygiene products as gentle as possible with the skin, without perfume or irritants, do not insist on areas with blisters and do not use abrasive objects such as sponge/brush.

Can help relieve symptoms of chickenpox, helping the body fight the infection:

Medicinal treatment involves the administration of paracetamol in the case of febrile sins, with the indication that the American Academy of Pediatrics recommends avoiding ibuprofen, as this may increase the risk of overheating of the vesicles.

For calming the itching can always some menthol solution can be applied and if discomfort is accentuated antihistamines can be useful, well known in allergy treatments.

Antiviral or antibiotic treatment is recommended only in the case of severe forms of chickenpox or in the case of the development of complications, requiring medical supervision.

The most effective method of preventing chickenpox infection remains vaccination, with the chickenpox vaccine being administered from 9 months of age in two doses regardless of age. In the case of contact with a patient with chickenpox, the chickenpox vaccine administered in the first 3-5 days can significantly reduce the chances of contacting the disease, or, in the case of infection, the symptoms manifested will be much milder and the duration of the disease shorter.

In the United States, since the inclusion of the chickenpox vaccine in the vaccination program, there has been a more than 90% decrease in severe cases of chickenpox requiring hospitalization.

Is there immunity against chickenpox after we go through the disease?

Immunity after the disease is strong and lasting, but there are people who fail to get rid of the virus, which remains confined to the body for years or all their lives, in inactive form.

If at some point the body is in a difficult situation, i.e. the immune system is depressed, the virus can resume its activity and trigger Zoster Zone. It should be noted that a person with Zoster Zone can transmit the infection only if the healthy person comes into direct contact with the characteristic vesicles.

We are wherever you are for a precise diagnosis or help in managing chickenpox, at one click click away.